If you know this approach, Fish can be interesting - never boring, as a food choice.

Most people who eat fish only eat it because someone else cooked it. That includes a lot of restaurant ordering. Unless you frequent a reliable restaurant with interesting fish variations, you can quickly run out of fish meals. If you are not a chef, how do you keep fish interesting? Especially Salmon? Or any sustainable white fish that is nutritious?

You want interesting fish meals Lets travel on our plates. How? You do not have to book a flight.  Your fish can be your passport to the Maghreb (1)  the Levant (2) and the Occident.

In other words, let’s sample the simpler cuisine of the ancient Roman World- the Mediterranean and the modern countries that border it. Simpler cuisine because these countries have hot climates and fish needs to be consumed soon after it is caught. Healthier because the Mediterranean diet is what your dietitian, your cardiologist even your personal trainer keeps talking about. Let’s look at the cooking styles of the Mediterranean diet but not in the Italian mode. Therefore no spaghetti (this “travel approach “is gluten free) and it may not even use olive oil- whoa! 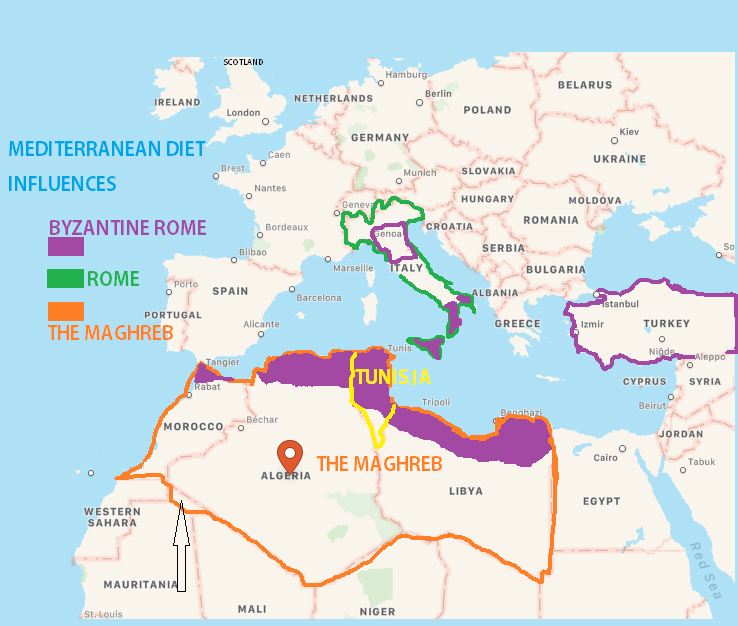 Algeria, Libya, Tunisia, and Morocco -- But not Egypt or Israel

From the Halls of Montezuma to the Shores of Tripoli is how the song goes. The Maghreb does not start in South America but it does end in Tripoli Libya. The region (2) including Carthage was under Roman rule or Roman-Byzantine rule from 149 to 698. Instead of spaghetti accompanying the baked or grilled fish, there was couscous (wheat origin)
or rice pilaf. For flavor:  argan oil or peanut oil. Very heart healthy.

The “African” version of the Mediterranean diet is approximately 40 consistent foods locally
grown and locally caught. This  includes sardines (the other fish with high omega oil content)

Algeria was exposed to the French culinary tradition on the other end of the Maghreb. A French colony between 1830 and 1962 the food is more Southern France like Marseilles. Spicy. Spices for fish braising and grilling include non-typical items: cumin, caraway, marjoram, coriander Fennel. The most complex is the @12 spice mix Ras el hanout (Oxford Companion to Food pg 671) Techniques for healthy French cooking in the Algerian style includes two foods you have eaten if you tend to go out. You can always call upon the chefs at Seafood4unow to wow your friends. 720 331 4525. Consider the following :

In the traditional version, the fish is served on a platter separate from the broth. The broth is served with rouille, a mayonnaise made with egg yolk, olive oil, red bell pepper, saffron, and garlic, spread on pieces of toasted bread, or croûtes.

In Marseille, bouillabaisse is rarely made for fewer than ten people; the more people who share the meal, and the more different fish that are included, the better the bouillabaisse.

What about the other North African Mediterranean countries of the Maghreb Libya, Tunisia, and Morocco? Or even Mauretania? Who lives there and cooks like this?

It is the Berbers who are so indigenous to the region that they cannot tell you how Long they have been there. 60% of the population of the Maghreb is Berber. Bored with classic Italian Mediterranean?  Get with the Amazing (the preferred name for Berbers).

Amazing -This is a fun cuisine

Fun because Amazigh is pan-North African. Amazigh  can be Moroccan or Algerian or Tunisian or Libyan
The national identity even though genetically shared, is expressed differently in each country with the same spices in different combinations. This keeps it fresh! Look at the chart below:

The least familiar is Algerian cuisine. It has not invaded the US like Ethiopian or even Senegalese. 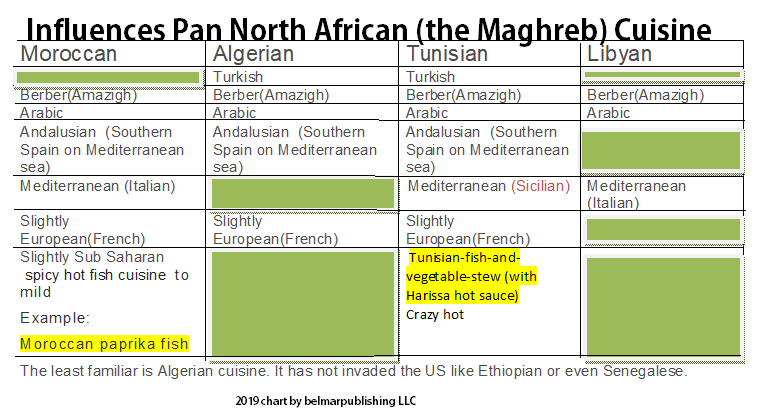 *Since the Ottoman Empire expanded into the Maghreb(post fall of Byzantine Rome) there are also Turkish influences. 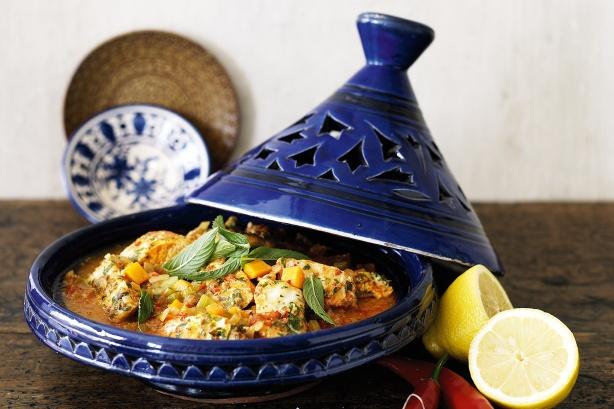 How to cook fish in the North African Mediterranean Tradition

But the Tunisian fish will be a quiche cooked in a pan Even though the Tunisians call their fish quiche a tagine, Confused? Let the crew at seafood4unow.com figure it out. They also know how to adjust the spicy heat of these fish for American palates. seafood4unow.com have clay pots (tagines) and the spices.

Most importantly at seafood4unow.com   Ken at  720.331.4525  can get you started
In the wonderful world of North African Mediterranean which is the hottest food
trend using heart-healthy spices, oils, and fish in new exciting ways that will
entertain and delight you!
Blog readers special wild-caught  Alaskan King Salmon fillets 5-pound box $94.00
Royal Red Shrimp wild caught 5-pound box $84.00 Phone order, please
To order call 720-331-4525

1. Mix together the olive oil and balsamic vinegar in a small bowl. Arrange the salmon fillets in a shallow baking dish. Rub garlic on to salmon fillets, then pour vinegar and oil over them, turning wants to coat. Seasoned with cilantro basil and garlic salt. Set aside and marinate for 15 minutes.
2. Preheat broiler
3. Place the salmon about 6 in from the heat source, and broil for 15 minutes, turning once, or until Brown on both sides and easily Flakes with a fork. Brush occasionally with the sauce from the pan.